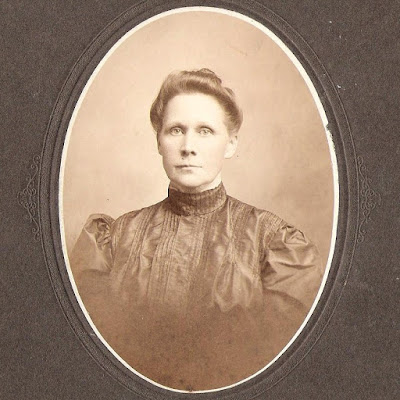 Indie Lee Ogburn. I love everything about my great-great-grandmother's name.

It's fun for me to find a unique name, like that of another one of my 2x great-grandmothers, Edmonia Harriet Stratton. The hope is that it will be easier to research someone if their name isn't so common. That there won't be such a mystery surrounding them.

And mystery abounds when it comes to my Grandma Nora's family. There has always been this cloud over my understanding of her past, like a sheet keeping me from seeing what lies behind it. But Indie - my grandmother's grandmother - is shedding some light on the mystery that surrounds my Grandma Nora's family. Discovering Indie is an encounter with part of Nora. For me to understand what lies behind the mystery, I have to get to know Indie Lee Ogburn.

From Brunswick to Dinwiddie

Indie Lee Ogburn was born in either 1864 or 1865 in Brunswick County, Virginia to James A Ogburn and Martha Elizabeth Smith. All of her grandparents were born in Brunswick as well, a county situated on the border with North Carolina. Besides the Ogburn family, she was also descended from the Browder and Smith families, all of which have deep roots in Brunswick. 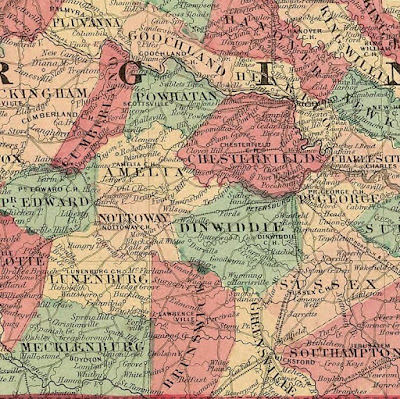 Indie was the third child born to her parents, and she had eight younger siblings! In 1870, the family was still living in Brunswick County but by 1880, the family had moved northeast into Dinwiddie County to a small town called Darvills.

Now, there's some question as to when Indie was actually born. From 1880 on, she lists her birth year as 1865. But there's reason to believe she was born late 1863 or early 1864. Indie's sister Lucy - whose birth record shows she was born August 1865 - was listed as 4 in the 1870 census while Indie was listed as 6. So Indie must have been born a year and half or so before that. Unfortunately, there seems to be a gap in birth records from Brunswick County from 1863 and 1864.

On 2 March 1887, Indie married James Thomas Vaughan at Rocky Run Methodist Church in Dewitt, Dinwiddie. Considering both families were living in Darvills at the time, I'm not sure why they went 11.5 miles east to get married instead of to the Methodist church around the street. This is another one of those stories I'd love to figure out.

She married well, it would seem, because her husband proved to be an industrious man! James was a farmer and blacksmith - which seems industrious enough to me. But he also ran a general store, a grain and lumber mill, a funeral home, and the post office! On 28 February 1908, their home burned - which made the local paper - but they were able to rebuild a home which still stands today.

Indie and James had ten children, three of whom passed away as children. Indie's husband James passed away on 20 December 1919 in Darvills at the age of 54. Their grandson Edgar Thomas Vaughan understood that he died somehow in an accident at his mill. His death certificate simply says he died of apoplexy - a sudden loss of consciousness and paralysis, generally meaning a stroke.

From what I can gather, Indie was a character. She must have been a tough cookie, someone who came from a large family and created a new one of her own. She helped her husband with his many business pursuits and worked to make sure people paid their debts to their family. As Indie was nearing the end of her life, she began to suffer from Alzheimer's or dementia and she passed away on 12 April 1944 in the county she had called home for most of her nearly 80 years.

Part of Indie's legacy, unfortunately, is a strained relationship with her daughter - my great-grandmother - Josephine (Josie) Lee Vaughan. At some point, Josie was disowned as Indie wrote her out of her will. While I don't have access to Indie's will at the present, I suspect the problem may have had to do with Josie's marriage. Josie seems to have eloped at the age of 15 with my great-grandfather Grover Steven Hite. They went down to Warrenton, North Carolina to be married by a Justice of the Peace on 28 May 1915, and their marriage record even lists Josie as 18 years old instead of her actual age of 15.

I can't be sure, but I suspect Indie held a strong grudge. And even though Josie moved back to Darvills where her four children were born, they didn't stay for long. Josie died after suffering for four months with pelvic inflammation and puerperal sepsis on 27 July 1927. This fact itself is curious. Puerperal sepsis is a common postpartum infection, which would imply Josie had been pregnant recently. But her youngest child - that we know of - was born three years prior. There's more to this story, I suspect.

Grover took their three girls (including my 7 year old grandmother) to an orphanage in Richmond and he raised his son himself. Since my grandmother grew up north in Richmond, far from her Darvills family, she was never very connected to them. Interestingly enough, Grover remarried in the last year of his life - 1943 - to another of Indie's daughters (Erma) who had also been widowed. 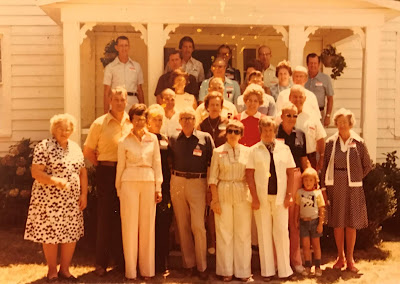 Indie's family was a large one. In the photo above, from about 1976, Indie's grandchildren (including my Grandma Nora) gather at the old home in Darvills. One of my Grandma Nora's first cousins, Preston Parham - who's also in the photo - recalled that moment long ago as a little boy, when his cousins were driven away to the girl's home in Richmond.

It's only been through genealogy, the wonders of modern technology, and a bit of Indie's stubbornness that her descendants have once again been able to reconnect. I've visited Indie's home, I've gotten to spend time at Josie and Grover's graves, and I've benefited from the determination of other descendants of Indie's who are working to keep alive our ancestor's memory.

Indie Lee Ogburn was a strong woman. She managed her home, she managed her family, she managed her businesses. And perhaps her strength and determination also translated into a cold stubbornness once she had made her will known. At the very least, it didn't help hold her daughter Josie close despite their personal differences. And that trickled down as my Grandma Nora seems to have later identified Darvills with pain and loss. I still wonder though if Nora ever got to develop a relationship with her grandmother Indie before she passed.

While some questions may forever remain unanswered, Indie has certainly helped me paint some of the picture of my Grandma Nora's past. And all of this reminds me of the importance of family, and the clarity that no feud or disagreement is worth decades of lost relationships.

Does the number 12 represent anything in your family? Do you have an ancestor who had nearly 12 children or does anyone have an anniversary, birthday, or death date on the 12th?

This post was inspired by the week 12 prompt "12" of the year-long series that I'm participating in with Amy Johnson Crow's 52 Ancestors in 52 Weeks.

My ancestors - and your ancestors - deserve the best researcher, the most passionate story-teller, and the dignity of being remembered. So let's keep encountering our ancestors through family history and remembering the past made present today!
at May 24, 2019