The Challenge of Endogamy 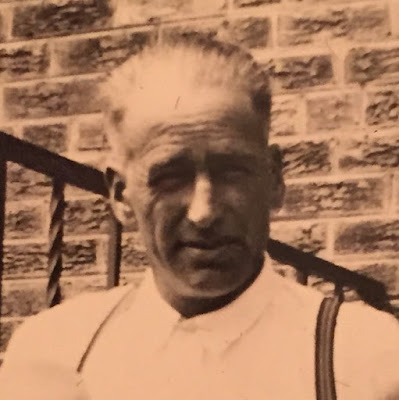 My Grandma Nora's father was named Grover Steven Hite. He was born between 1890 and 1893 (the verdict is still out as to when he was actually born) in Halifax County, Virginia.

Grover had deep roots in Halifax County, Virginia. In fact, all of his great-grandparents lived in Halifax.

With such a strong connection to one specific place for at least a century, my great grandfather's family is seemingly connected to everyone in Halifax! This connection that he shares with so many people is due to a custom called endogamy. So this post will discuss some of the dynamics I've discovered in my great-grandfather Grover's family and the challenge that endogamy poses to my genealogical research.

Endogamy is a practice in which communities marry within their own social group, repeatedly over time. This is a custom particularly prevalent within communities such as Ashkenazi Jews, Amish, Mennonites, Native Americans, and Acadians.

Since endogamy affects specific communities more than others, there aren't a ton of writers and speakers on the topic. Thankfully, I was able to go to a great talk by Lara Diamond at RootsTech 2018. So make sure to check out her blog as well as this post which specifically deals with how endogamy affects her genetic genealogical research.

I'd also really recommend you read Endogamy and DNA, a guest blog post by Paul Woodbury over at Kitty Cooper's blog, as well as this post which will further help you to understand the complexity that endogamy adds to researching one's ancestors.


Grover was born to George Berryman Hite and Cordelia Frances Tuck, a pair of first cousins who both grew up in Halifax County. The two shared Reuben Wilkins and Edna Elliott as maternal grandparents. As far as I can tell, this is the only episode of cousin-marrying within his genetic line. But as I research Grover's various cousins within Halifax County, I find repeated examples of them marrying close and distant cousins.

One example was Grover's first cousin, Charlie Edward Hite and his wife Mary Otelia Wilkins. Of this pair's eight grandparents, four of them have the surname Hite. On further investigation, you'd find that these four Hites were all siblings, the children of Spencer Perry Hite and Martha Jane Wilkins of Halifax County, Virginia. Put another way, Charlie Hite's parents were first cousins and Mary Wilkin's parents were first cousins.

The more I research Grover's ancestors, I find that many of their children married cousins. Over and over again, I see four common surnames in Halifax County, Virginia records: Hite, Tuck, Wilkins, Elliott.

As the bloggers have mentioned in the posts I linked to above, endogamy has a clear affect on our use of DNA in our genealogical research. Two individuals from the same endogamous community will undoubtedly share more DNA with each other than your average couple with the same known genealogical relationship.

When we look at shared DNA charts like this one produced by Blaine T. Bettinger, we see that two individuals who share a set of great-grandparents (in other words second cousins) share on average 233 cM of DNA (with a range of 46-515 cM). Depending on how many of one's ancestors are from the same endogamous community, this number will be inflated and exaggerated.

In researching the DNA matches of my father and aunt (both the grandchildren of Grover), I see an inflated predicted relationship for most of their second and third cousin matches. Usually, if they are within the predicted range, they are at the upper end of that range. In the fourth cousin list, most of these matches are related to our family several times over but at a much further place in our tree.

The biggest challenge that I have found relating to endogamy is that it induces a level of despair - or at the very least apathy - in researching my family from Halifax County, Virginia.

With many of my ancestral lines, I am able to identify specific DNA cousins who connect to my family through specific ancestors. But with my DNA matches that come from Grover's family, I can't tell if they are Hites, Tucks, Wilkins, or Elliotts - or some repeated mix of all of them! And more often than not, they have all of these surnames in their family history. So unlike my other family lines, my Halifax County relatives have remained more of a mystery.

When I see a DNA match, I can quickly say - without a shadow of a doubt (and even if they have no tree) - if they have Halifax County ancestry. But, that's usually all I can tell. This is because the Hite, Tuck, Wilkins, and Elliott families have so intermingled within Halifax County with each other as well as with other families that they've produced something of a new amalgam of simply "Halifax."

The challenge of endogamy need not be the despair-inducing, apathy-inspiring thing that I so often allow it to be. DNA tools such as DNA Painter are making it easier than ever to identify which segments of DNA come from which ancestor. If you have encountered endogamous ancestry in your family history, don't give up! Learn from others who have researched their own endogamous communities.

Genealogy is full of challenges, and endogamy is only one of them. Most of us who are so enraptured by genealogy and family history find solving the puzzle the most satisfying aspect of our research. And what puzzle is more satisfying than a challenging one?

This post was inspired by the week 2 prompt "challenge" of the year-long series that I'm participating in with Amy Johnson Crow's 52 Ancestors in 52 Weeks.

I hope you'll join me soon as I strive to encounter my ancestors through family history and remember the past made present today.
at February 01, 2019