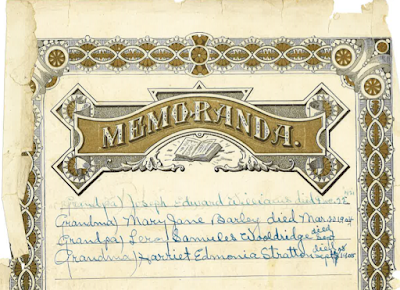 Some of our ancestors just seem to insist on hiding from us. They show up in records and then disappear. Others leave a nice trail behind them like bread crumbs for us to follow after. Still others beckon for us to dig deeper.

My 2x great grandmother practically demands my attention. Her name jumps out on the page as if to say, "Here I am! Come on now, I have something to share with you!"

So let's not leave her waiting, y'all! She's got something to say!

Edmonia Stratton first makes her appearance in the records in the 1850 U.S. Census for Powhatan County, Virginia. At a year old, she's the youngest - at the time - of her many siblings. She's the youngest girl of her parents David Stratton and Jordenia E Hopkins. Her father was a native of Powhatan, her mother of neighboring Chesterfield County.

Edmonia had twelve older siblings! Her mother was the second wife of David Stratton - the son of a Revolutionary War patriot from the same county. Edmonia's early years were also marked by the paradox of the institution of American slavery - that even family could own family. Her father had inherited an enslaved woman named Sally from his first wife's father. The memory of "Aunt Sally" remains in the family to this day. She bore David a daughter named Kate Stratton, an enslaved woman - and Edmonia's older sister - who remained with Edmonia's family until the day of her emancipation. Whether Edmonia knew that Kate and her children were her sister and nieces and nephews we can only speculate. We do know that the families remained neighbors and were buried in the same family cemetery.

The Stratton family attended Peterville Baptist Church, a local church community with an established Sunday School. David Stratton owned for a time a tavern in the town of Macon in Powhatan County but after the Civil War, he lost the tavern and filed for bankruptcy. Edmonia's sisters married into the Hague family, and one was even a local post mistress!

When Edmonia was 18 years old, she married Leroy Samuel Wooldridge - a veteran of the Confederate army. Leroy's family descended from an important mining family from Chesterfield County that founded the town of Midlothian. Even after marriage, Edmonia remained a member of her family's church - Peterville - though in time her family became affiliated with Powhatan Baptist Church further east.

From 1869 until 1888, Edmonia bore her husband Leroy eight children. Most of the Wooldridge children remained close to Powhatan - all but two married - and many are buried at Old Powhatan Baptist. But by 1910, her husband is listed as a widower.

Unfortunately, neither Virginia nor Powhatan County kept records of deaths between 1900 and 1910, so there is no vital record of her death. Thankfully, her daughter Mary Susan Wooldridge - my great grandmother - recorded the date of her death in her family Bible.

From Unusual Name to discovery

The more I saw records of my "Grandma Edmonia", the more I wanted to discover more. She passed away at the young age of 57, but her daughter - my "Granny Williams" - lived to be nearly 100. How did she pass away? What happened? Not only was her first name "Edmonia" intriguing, so too was her surname "Stratton." It has always fascinated me and called for me to discover more.

My curiosity to discover more about Edmonia has led me to make the Stratton family one of the most thoroughly researched parts of my family history. I have connected with more Wooldridge-Stratton descendants than probably any of my other family lines. I have been part of the puzzle in helping adoptees discover their roots and I have met long-lost cousins over barbecue and old photographs. These connections have given me priceless gifts like the exact dates of birth of Edmonia and her siblings from their Family Bible. These cousins have shared letters written by Edmonia's brother about the Civil War's affect on his life and his fears for their brother's safety while fighting in the war. What price could you ever place on such goldmines of family history? What gifts!


Because of Edmonia, I have newfound family members, ever reminding me that genealogy is always about family: that research without connection, documents without stories, and DNA evidence without relationship is just...data. Edmonia may have passed from this life in 1905, but she keeps inspiring her descendants to stay connected and to actively remain family.

Before I began to research my family history, I had never heard of Edmonia Harriet Stratton. But after I had been introduced to her through the records, she has guided me ever since. I may not know many of the details surrounding her daily life or the cause of her death, but she has been the catalyst for so much of my research.

Though I may not know why the Stratton family chose to name her Edmonia - I am grateful that this unusual (though beautiful) name stands so prominently within my family tree.

Which of your ancestors' names stands out to you the most? How has an "unusual" name inspired your research?

This post was inspired by the week 3 prompt "Unusual Name" of the year-long series that I'm participating in with Amy Johnson Crow's 52 Ancestors in 52 Weeks.

Join me next time as I encounter my ancestors through family history and remember the past made present.
at February 08, 2019