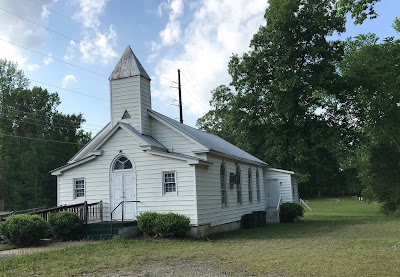 If you go far out enough in Powhatan County, and drive south on route 13, you'll eventually hit the town of Macon right before the road curves sharp west. Well, today it's not really a town. It's just a Macon sign, a curve in the road, and a stop sign. But in the 1800s, there was a tavern, a post office, and a town store. It was the administrative center for the western portion of the county. And it was there that the patriarch of the Stratton family, David Stratton, ran a tavern, was Constable, and the town postmaster. After him, his daughter Louisa Catherine and his son Douglas also ran the post office. The Strattons were faithful members of Peterville Baptist Church and after the fall of the institution of slavery, the African Americans who had once been owned by the Stratton family went on to found Pine Hill Baptist Church.

As any small town, there were no true secrets in Macon. Especially if you were a Stratton. That was all too true for David's son Douglas who was kicked out of his church, never married, and moved north to New York. But after a while, even country "secrets" start to be hidden.

Well, that is until your third-great nephew goes digging into the family history a century later!

So what happens when you're David Stratton's son and there's something you're trying to keep secret? What would make Douglas E Stratton a life-long bachelor, by law?

Douglas E Stratton was born 24 Mar 1852 in Powhatan County, Virginia to David Stratton and Jordenia E Hopkins. He was their youngest child, and just a few years younger than my 2x great grandmother Edmonia Harriet Stratton.

Before Douglas was born, several of his older half-brothers moved to Alabama and later to Kentucky. His father was 64 when he was born, so he even had nieces and nephews who were older than him! When Douglas was nine years old, the Civil War began and just one week after his 11th birthday, his brother David Creath Stratton died in the war - just missing his 21st birthday. On the 4th of July, in 1867, his older brother Robert was murdered in his sleep in his home in Gainsville, Alabama. Weeks before Douglas turned 16, he lost his mother Jordenia on 2 Mar 1868. That's a lot of loss for the youngest in the family.

Douglas never even met his grandparents. His paternal grandfather - John Stratton - fought for Powhatan County during the Revolution. His maternal grandmother - Mary H Martin - was of proud French Huguenot stock, descending from John Martin who settled Manakin in 1700.

After Douglas' mother passed away, he and his father David were living in 1870 with Douglas' sister Emily and her husband Francis Bishop Hague. The following year, on 24 Apr 1871, David Stratton passed away and the next record we have of Douglas comes from the minute book of Peterville Baptist Church.

Just months after David Stratton passed away, Peterville Baptist Church appointed a commission to find Douglas E Stratton. On 23 Jun 1871, he was called a "habitual absentee" from church and Deacon Bagby was appointed to look into his "spiritual state." In July 1871, Deacon James D Bagby "reported he had not seen Brother Douglas Stratton." In April 1872, Deacon Bagby was "appointed and directed to cite Brother Douglas Stratton to attend at next church meeting to show cause why he should not be dealt with for habitual absence from church meetings."

By May 1872, "E. Douglas Stratton was excluded for want of Christian character."

During the 1870s, Douglas served as the postmaster of Macon and by 1800, he was listed as a carpenter. In 1880, Douglas was living with his niece Alice Elizabeth Hague and her husband Walter Henry Harris.

We have no census records for Douglas until 1920. He's missing in both the 1900 and 1910 census. Where was he? I'm not quite sure! But, he shows up in other sorts of records just as mysteriously!

On 3 Jan 1898, a curious record was produced in Powhatan County. A Suvella Stratton married William Henry Brown at Mt. Pero Baptist Church. Suvella lists her father as Douglas Stratton and her mother as Nancy Jackson. Could this be our Douglas Stratton? What's so curious about this record? 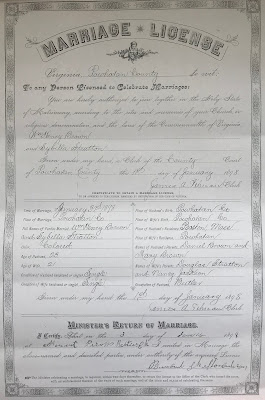 Both Suvella and William are listed as "colored." What's more, Mt. Pero is a historically black church founded by previously enslaved members of Peterville Baptist Church. As soon as they were married, Suvella and William moved north and by 1900 were living in Pleasantville, New Jersey. 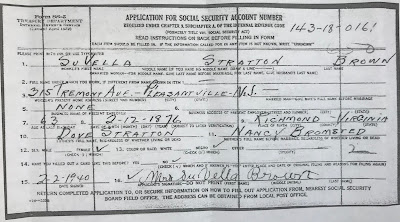 When Suvella applied for her social security in 1940, she lists her father as "Dove Stratton" and her mother as "Nancy Bromsted." Douglas to Dove. Jackson to Bromsted. Perhaps this is a different person all together, you might say. Why even assume her father is our Douglas?

In 1920, we finally find Douglas again living in Macon. He's listed as single, and living with him is a single "mulatto" woman named Maria Wells listed as his servant with an 11 year old daughter Valeria Edith Wells.

On 30 Oct 1926, Maria Wells passed away. Her death certificate lists her as a single "domestic." She's shown as being buried at Pine Hill (shown in the first photo above) in Macon. And who's the informant? Douglas Stratton of Macon, Virginia. Douglas E Stratton is also a witness to her will she wrote just before her death.

By 1930, Douglas is again living by himself and is a 76 year old single farmer. 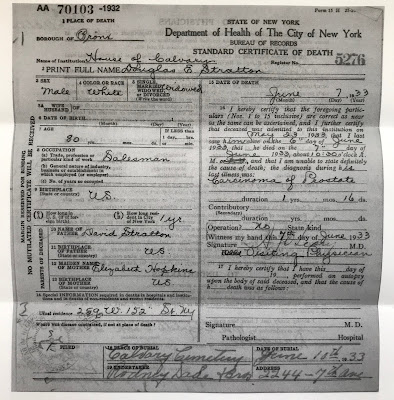 The last document we have for Douglas is what appears to be his death certificate from New York City. The parent names add up, but there's no clear evidence it's the same Douglas E Stratton. It doesn't even list his state of birth. He's listed as an 80 year old widowed salesman. He died at a historic hospital, House of Calvary, devoted to offering hospice and palliative care. The back of the document lists the informant as his daughter, Elizabeth Hash.

So far, we have random loosely-connected stories for Douglas E Stratton. We have a "colored" woman listing him as her father. We see him intimately connected to Maria Wells, a "mulatto" woman and we see he's a life-long bachelor. And don't forget, there's the gossip of a small town! A living Stratton cousin of mine remembers being told that Douglas was involved with black women and even had children. Children! So far, we only know of one!...right?

Well, more than the paper trail of Suvella Stratton Brown, there is DNA evidence connecting Suvella to the Stratton family. Several descendants of Suvella match my father and aunt as second to third cousins - sharing between 186 cM and 221 cM of DNA with them. More than simply sharing this DNA in common, all of their shared DNA matches are descended from either David Stratton or his father John Stratton. And then I saw a photo of Suvella. 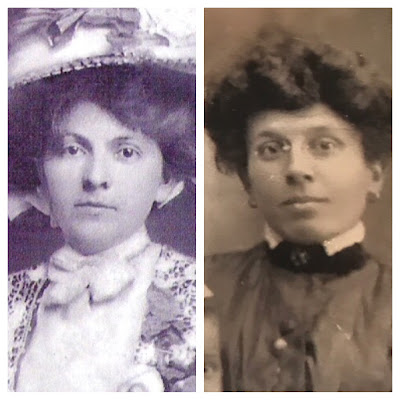 Douglas Stratton could never have married Suvella's mother Nancy. Since a 1691 law, interracial couples could not remain in Virginia. Anti-miscegenation laws prevented marriage between people of different colors in the state of Virginia - even "illicit cohabitation" - until Loving v. Virginia in 1967. So whether Douglas and Nancy had a long-standing relationship or not in 1876 when Suvella was born, it would be another 91 years before that relationship would have even been legal in the state.

That Douglas and Maria Wells were close cannot be dismissed. He sold land to her, he witnessed her will, she lived with him. But whether she was actually his servant or if that was just a cover can only be surmised. I have yet to find a link between Maria's children and the Stratton family. But, we do have reason to conclude that Suvella was truly Douglas' daughter.

My great-grandmother would have been ten years old when her first cousin Suvella married William Henry Brown and moved to New Jersey. It's likely she never met her, but she had to have known her uncle Douglas. If only I could have asked her about his life and what she knew about him. Did everyone gossip about her bachelor uncle? Did he ever get in trouble with the law for breaking cohabitation laws?

Douglas E Stratton may have been a bachelor, but probably not by choice. He was a bachelor by law.

This post was inspired by the week 10 prompt "Bachelor Uncle" of the year-long series that I'm participating in with Amy Johnson Crow's 52 Ancestors in 52 Weeks.

My ancestors - and your ancestors - deserve the best researcher, the most passionate story-teller, and the dignity of being remembered. So let's keep encountering our ancestors through family history and remembering the past made present today!
at April 23, 2019