Powhatan History is in Your Hands 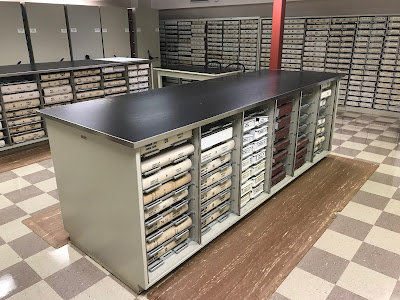 Powhatan County has a rich and long history that deserves to be preserved. And while organizations and politicians make it their business to discuss the preservation of buildings and monuments, the citizens of Powhatan County have a duty to protect something that transcends politics: the county's records. But remarkably few know that much of the county's history is held within one small room at the Powhatan Courthouse.

Just as you enter the Powhatan County Courthouse, on the right, is the Circuit Court Clerk's Office. Many know the clerk's office for being where you go for passports, marriage licenses, and land plat information. Fewer could tell you that this office holds hundreds of years of Powhatan history in the record room. Less visible than monuments and buildings - but older than any of them - are the wills and deeds, the marriage licenses and minute books, the order books and chancery records that lay mostly forgotten.

So why should you care about some old dusty records at the courthouse? The answer is closer to home than you might think.

As of February 2019, an estimated 26 million people have tested their DNA with in-home DNA testing companies including AncestryDNA, 23andme, MyHeritage, and FamilyTreeDNA. What drives so many people to have their DNA tested? For some, it's to discover their ethnic origins through these companies' increasingly specific ethnicity estimates. For others, it's to find long lost family, or for adoptees to discover their birth family. And for the growing community interested in their genealogy and family history, DNA testing provides a living record that proves vital to their research.

It's likely that if you're reading this, you - or one of your close family members - have already been DNA tested. And after seeing your ethnicity estimate, you'll notice a long list of all the other people in the database that match you as a cousin. The first question for most people is, "How on earth am I related to all these strangers!?" To figure this out, you need records. You need a paper trail to follow. But what happens if these records are lost, forgotten, or - even worse - destroyed because there's no room to store them? This is a risk Powhatan faces if more residents do not push for the preservation of their records.

If your ancestors lived in Powhatan, do you know where they lived? Do you know how they obtained their property? Was your grandmother left something in her parents' wills? When did your great-grandparents marry and which pastor performed the marriage? How old were your ancestors when they married? Do you have a Revolutionary War patriot that served from Powhatan? All of these are questions you can answer at the Circuit Court Clerk's Office. And once you discover you have a deep-rooted connection to Powhatan's history, you'll realize just how important it is to preserve that history.

To learn more about the Clerk's Office and how you can help preserve Powhatan history, visit http://powhatanclerksoffice.net/.

What have you discovered at the courthouse? Have you helped preserve or digitize records at your local courthouse?

This post was inspired by the week 9 prompt "At the Courthouse" of the year-long series that I'm participating in with Amy Johnson Crow's 52 Ancestors in 52 Weeks.

My ancestors - and your ancestors - deserve the best researcher, the most passionate story-teller, and the dignity of being remembered. So let's keep encountering our ancestors through family history and remembering the past made present today!
at April 12, 2019