Growing up, my least favorite part of every new school year was roll call. I was always at the end of the list - the curse of my "W" surname. And then, the teacher would inevitably call for me with my first name - which nobody knows me by. "Here! But, I go by Sam, please." Looks of confusion would ensue until I explained that Samuel was my middle name.

I never liked my first name. It helped me identify with my friends who had complicated or "ethnic-sounding" names. Not everyone likes to stand out. It's no surprise that immigrants changed their names after living in the United States for a bit (and no Ellis Island didn't change their name!) But for the genealogist, we yearn for different sounding names for our ancestors. Not so different that they're constantly spelled differently...but different enough that you don't have five men of the same name in the same town!

Alas, I was blessed with a family full of Williams, Adams, Smith, and the like. So what is a genealogist to do with an ancestor like "William Adams"? And worse yet, a William Adams who lived his entire life before the 1850 census that collected names according to household?

The first I discovered that I had a William Adams ancestor was in the 1838 marriage record in Powhatan County, Virginia of my third great-grandparents Joseph Williams and Ona Ann Adams. In this record, Ona Ann's father is listed as William Adams. So I looked for William Adams' marriage record, and I found that he married Mary (Polly) Moore in Powhatan in 1801. I turned next to census records, and found only one William Adams in Powhatan County for the 1820, 1830, and 1840 U.S. censuses. Since these censuses do not list family members besides the head of household, I noted the numbers and ages of those listed in his home including the enslaved.

The 1850 U.S. census was the first to list all members of a household, but unfortunately I cannot find William Adams or his son-in-law in the 1850 census. By 1860, I see Mary Adams (presumably now a widow) living with Joseph Williams and Ona Ann in Powhatan. So why can't I find any of them in 1850? Did William Adams pass away before 1860?

Since there are no death records in this time for William, I have to turn to other records to discover more.

Though there didn't seem to be a lot of records on William Adams, he had one thing going for him: he wrote a will! And where there's a will, there's a way...to discovering our ancestors!

William Adams wrote his will in Powhatan County on 3 Jan 1843 and within his will, he mentions his children as Sarah OBryant, John Adams, William Adams, Richard J. Adams, Peter F. Adams, and Ona Ann Williams. He also includes his grandchildren John T. Moore and Catherine Watkins. Catherine Watkins was the daughter - I have since discovered - of William's daughter Pernetta who appears to have passed away before her father. I haven't discovered how John T. Moore fits into the story yet.

There are a few other nuggets of information that are hidden away in this will. The first is that William desired to have his estate kept together for ten years after his death. "At the expiration of the said ten years my will and desire is that all of my estate be divided between my beloved children and grandchildren," he goes on to write. We will see that this little detail will prove helpful in creating more records!

Did we ever discover when William passed away? The bottom of the will gives us some clues about this too. We see that on 1 Apr 1844, "the foregoing last will and testament of William Adams deceased was presented in Court and proved by the oaths of Wm. R. Moseley and Joseph Goode and the solemn affirmation of Ro. M. Moseley, the subscribing witnesses to the same, and ordered to be recorded."

This tells us that William Adams passed away between 3 Jan 1843 (when he wrote his will) and 1 Apr 1844 (when his will was proved in court). We also now have a list of three witnesses to his will: one of which - Robert M. Moseley - gave a solemn affirmation instead of an oath. Some take exception to taking oaths - particularly the Quakers - so law allows these individuals to solemnly affirm in lieu of swearing an oath. These are new individuals to research who may also have records that include my family. I also plan to look at Quaker records for Robert M. Moseley.

Genealogists really ought to love taxes! I've written about them before, and I'll keep sharing how much we can find in these records. Since censuses were every ten years, tax records - both land and personal property - help fill in the gaps in the lives of our ancestors.

Personal property taxes are also very helpful, since all males 16 and older were included by name. William Adams appears every year in Powhatan beginning in 1802.

In checking Powhatan County militia records, I found that William Adams appears in an 1805 Powhatan Militia list. It was an unexpected find, but fun! The record says it was "for the purpose of forming a rifle company" with William Moseley as Captain, John T. Swann as Lieutenant and Samuel Davis as Ensign.

The beauty of chancery records

If you have Virginian ancestors, I really recommend that you search the Library of Virginia's index for chancery records! For Powhatan County, you can even view the scanned records from home! And guess what? William Adams is included as the subject of two chancery files: one from 1854, another from 1860.

Within these 106 pages (of course I read them all!) of legalese, there are tons of golden nuggets about the family of William Adams. The chancery files deal with the settling of William Adams' estate. Based on his will - as you may remember - they had to wait ten years after he died before they could divide up his estate. But, William seems to have forgotten someone in his will: his wife Mary!

Mary Moore Adams was very much alive ten years after her husband when his estate was being divided between their children and grandchildren. But, William's will did not provide for her! These records show how the estate was divided to provide for her - her 1/3 due as dower rights - as well as their children. The larger chancery record also includes the names of the six people enslaved by William Adams who were divided along with his estate. [The divisions of the enslaved are mentioned on pages 33, 36, 40, 41, 44, and 47, among others.] On page 41 is a bill of sale from 1848 involving Joseph Williams - William Adams' son-in-law - selling Amy and Sam to Benjamin Watkins.

These chancery records even solved a mystery that tied together various records and DNA evidence, painting a clearer picture of my William Adams!

From the will of William Adams, I knew that he had a son named John Adams and that he was still living in 1843 (when the will was written). But I couldn't find anything more about him. I knew there was a John Adams who married Lucy Ann Williams in 1832 in Powhatan, but I didn't know what came of him.

In my descendancy research for Joseph Williams, I found that Joseph and Ona Ann's daughter Eliza had two Adams men living with her and her husband Archer Hoye in 1860. They're listed as being born in Tennessee, one is William Adams, a 17 year old nail cutter, and the other is "A Adams" a 22 year old sailor. I didn't think anything more about them because they were born in Tennessee and because the 1860 census didn't note relationships to the head of household.

But then, I read the chancery records involving William Adams! And they confirmed that "A Adams" was Aurelius and that he had a brother named Marcus. Their father was John Adams who had passed away by about 1853. That means that William and Aurelius were first cousins to Eliza, with whom they were living in 1860. But I never would have discovered their relationship - or where John Adams went off to (Tennessee!) - without chancery records!

Over the years, in building my list of DNA descendants of Joseph Williams and Ona Ann Adams, I have connected online with some of my DNA cousins of William Adams. Two of these I had the pleasure to meet in person this July! 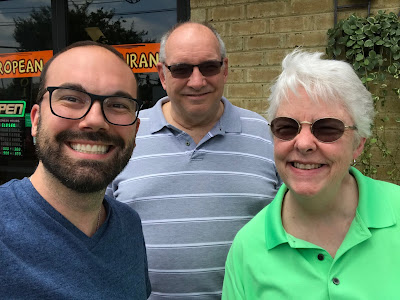 Earlier in the month, I finally got to meet Donna Adams McGrath! She is descended from William's son John Adams, through William Marion Adams. That's the William Adams who was living with his cousin Eliza I just mentioned. We suspect that John Adam's wife Lucy Ann Williams was also the sister of my Joseph Williams. [This is going to take more time to prove though!] Donna and I are 4th cousins once-removed - she and my dad are 4th cousins. She came down to Virginia Beach with her husband John and we had a great lunch together at the Bread Box Cafe. 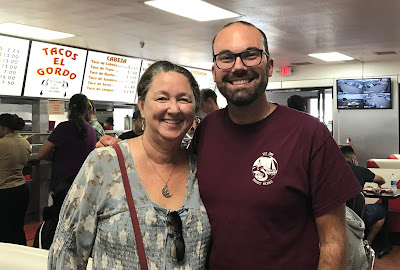 This past summer, I led a service trip to Tijuana and on my way south I was able to meet with another William Adams descendant in San Diego! Joan Adams-Reynolds descends from William's son William Adams Jr. and is my 5th cousin. We met while my group enjoyed delicious tacos from Tacos el Gordo. It was great seeing Joan on the other side of the country!

Not only had our traditional genealogy research brought us together, but DNA evidence has also linked us as family. Our shared DNA, along with shared DNA matches connect us as sharing William Adams as our common ancestor.

It just took a few road trips and nearly 200 years to bring our family back together again!

It can be a challenge researching ancestors with common names, especially before 1850. But no challenge should make us give up seeking our ancestors and telling their stories!

We can put down on paper all that we know about them, noticing all the little details in these records, and look for them in new record sets we might just have to dig for. Through our research, we may even get to meet distant cousins on road trips and find that our ancestors have stuck around in the gifts they've passed on to us, hidden in our DNA!

This post was inspired by the week 18 prompt "Road Trip" of the year-long series that I'm participating in with Amy Johnson Crow's 52 Ancestors in 52 Weeks.

My ancestors - and your ancestors - deserve the best researcher, the most passionate story-teller, and the dignity of being remembered. So let's keep encountering our ancestors through family history and remembering the past made present today!
at September 09, 2019