Why Genealogists Ought to Love Taxes 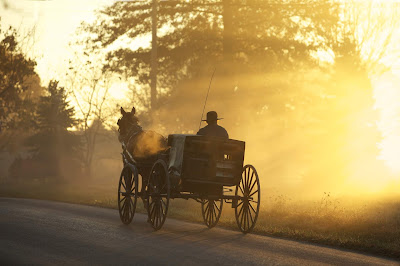 There's something ingrained within the American psyche that loves to hate taxes. Perhaps it's the Boston Tea Party, perhaps it's our Founding Father's distrust for central government, or maybe we just don't like giving up what's ours! Either way, taxation doesn't exactly summon happy feelings, does it?

It's not surprising then, that genealogists aren't always jumping up and down to dive into tax records. Taxes aren't as glamorous as marriage records, not as revealing as death records, and not as exciting as wills or inventories.

But tax records come with their own, varied, sets of information that can prove vital to the eventual crumbling of our ancestors' brick walls. To show how illuminating tax records can be, let's look at some records of various Williams men from Powhatan, Virginia. We've already looked at land tax records, so in this post we will investigate the roll of personal property taxes in the case of a brick wall ancestor.

Census records are vital to creating a firm foundation for our family history research. The only problem is that they only happen every ten years! How many places have you lived in the last decade? If you were to rely on records of my residence from only 2009 and 2019, you'd assume I had never left Virginia. But within that decade, I've lived in three other states - and multiple apartments on top of that! You see, a lot can happen within a decade.

For Powhatan County during the 19th century, we have the federal census available for the following years: 1810, 1820, 1830, 1840, 1850, 1860, 1870, and 1880. Some states filled in these gaps with state censuses, but Virginia did not - with the exception for some counties from between 1782-1786. That's where personal property tax records come in. They help identify who was living in a county over a certain age in any particular year. And instead of being only every ten years like a census, personal property taxes were recorded every year!

And like census records, personal property taxes are filled with clues and details that flesh out the lives of our ancestors.

Personal property tax records can serve as a yearly census substitute. But they're also filled with all sorts of clues that can lead us down the right path of revealing our ancestors' mysterious forefathers.

Here's an example of the heading for personal property taxes from 1831 Powhatan County:

Beginning in 1832, Powhatan County personal property taxes give us a tad more information. But the details make all the difference! See if you can notice the extra bits of gold they might offer: 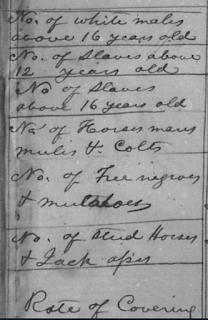 Did you notice what's new? In addition to listing the name of the person responsible for the tax, beginning in 1832, we now have a number of white males above 16 years old. Why might this be important? Because as young men get older, they'll begin to show up within their father's household. Then they'll move out and be taxed separately by name. This can be used in coordination with 1830 and 1840 federal census lists which designate the number of individuals by age range.

Additionally, with the 1832 personal property tax records we now have an additional listing for those enslaved over the age of 16. We also have the number of free negroes and mulattoes. For some years, free people of color are listed on their own, while in other years they seem to appear within the households of white families only to reappear in later tax lists.

Knowing now that genealogists should love what personal property tax records have to offer, how can we actually *use* these rich record sets? Let's look at some clues I've gathered relating to my ancestor Joseph Williams.

Since I knew that Joseph Williams married Ona Ann Adams in 1838 in Powhatan, I first looked for him in the personal property taxes for that year. 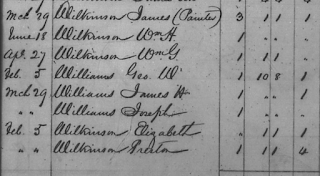 Joseph Williams appears here in Powhatan County, along with James H Williams and George W Williams. From 1838, I checked the 1837 tax list to see if Joseph appeared there too. 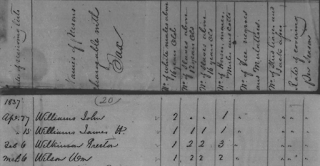 From 1832 - when the tax lists began listing numbers of men over 16 - until John Williams last appears in 1837, there are only four white Williams men listed by name in Powhatan County: John, George W, Henry, and James H Williams. Only John Williams lists more than one white male over 16 years of age during that time period, and he does so beginning in 1834.

So what does all this mean?

Well, we've either struck gold, or I'm playing in fool's gold! So let's reevaluate what we know so far.

Federal census records consistently record the date of birth for Joseph Williams as 1817. We know that he married in 1838 in Powhatan. And we know that the first time there was another Williams male over 16 years old in the household of John Williams was in 1834. This unknown Williams male would have been born about 1818 and - assuming there weren't different men over the age of 16 growing up and leaving the county each year - this same man lived with John through 1837.

When Joseph begins to show up in the personal property tax records in 1838, John Williams is no longer living in Powhatan. Therefore, we seem to have three options as to the relationship between Joseph and John Williams.

2. Joseph Williams is the son of John Williams, and John left the county in 1837.

Whew! Who knew you could find out so much just by looking at personal property tax records!?

Nobody likes to pay personal property taxes. Mine always seem to sneak up on me each year. But these same taxes leave crumbs along the way, evidence of where I've lived from year to year. They fill in the spaces from one federal census to the next. And, in the case of Joseph Williams from Powhatan County, his personal property taxes might even have identified his father!

We genealogists really ought to love taxes...well, at least the record of when our ancestors paid theirs!

Have you ever used personal property tax records for your brick wall ancestors? How might you use tax records as a census substitute?

This post was inspired by the week 14 prompt "Brick Wall" of the year-long series that I'm participating in with Amy Johnson Crow's 52 Ancestors in 52 Weeks.

My ancestors - and your ancestors - deserve the best researcher, the most passionate story-teller, and the dignity of being remembered. So let's keep encountering our ancestors through family history and remembering the past made present today!

So it all started with one of those silly Facebook quizzes. You know, the ones where you copy and paste what the first person wrote, b... 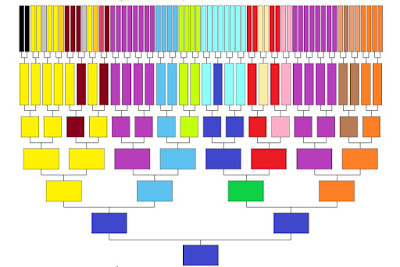