The Surprise of Alice Liney Hobbs 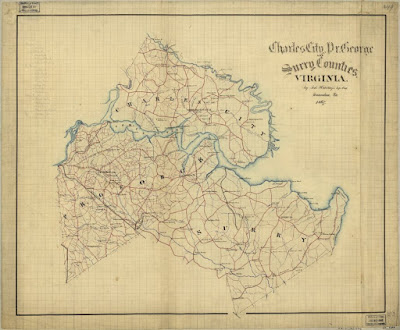 The other night, I sat staring at my family tree looking for a story. Not your average story. A juicy story. Something that catches my attention. A surprise.

I thought to look at a distant corner of my family tree that hasn't gotten much light lately - my maternal grandmother's maternal line. After some clicking around, and looking at some chancery records, boom. A story!

So let's take a look at the story I uncovered and some surprising connections I was able to make between my mother's family and my father's family. We'll also note some important lessons that we should remember when it comes to family history surprises.

Of my 2x great grandparents, only one hails from Prince George County, Virginia. Lillian Dee Emory was born in 1893 to William Robert Emory and Minerva Jane Rainey, both natives of the same county. This line has always fascinated me and occasionally pulls at me to dig a bit deeper. Emory, Eppes, Rainey, and Brockwell: the surnames of Lillian Dee's grandparents. What surprises are in store for me with this Prince George crowd?

My first step was to look back over what I already have on them. What census records are still missing? Have I included all of each generation's children that are listed in the census records? Have I worked on filling in their family story through vital records? I've found that digging a bit more on even one more child can correct assumptions, add more detail to names, and even break down brick walls.

Once I've covered census and vital records, my next move is to check out chancery records at the Library of Virginia. This takes some effort, but it's always worth doing a search there online. I searched the surnames Emory and Brockwell for Prince George County. My trick is to leave the plaintiff and defendant spaces blank. Instead of using those spaces, I type in one or two surnames in the surname blanks. This finds cases where a particular surname is mentioned but isn't necessarily the subject of the case. I don't get discouraged when I can't find a record for my ancestors...I just hope one of their descendants or a cousin is mentioned in a record. Chancery cases often include gems of genealogical data like names and dates that prove connections between people.

And sometimes you find the right chancery record with a story. A juicy story!

Only three cases include the surname Emory from Prince George. So I chose Prince George County chancery index number 1906-007 between Henry A Hobbs and Alice Liney Hobbs. It turns out to be a divorce case. I was hooked!

Henry A Hobbs was filing for divorce from his wife Alice Liney Hobbs. When they married in Prince George on 5 Dec 1901, Alice was listed as Alice Liney Emory. Ok, there's the Emory! But how is she connected to my family? So I read on. Alice deserted her husband on or about 5 Jan 1902 and at the time of the suit she still had not returned for more than three years.

According to the deposition of Henry A Hobbs' sons from his previous marriage, William Allen Hobbs and Charles Simmons Hobbs, Alice only lived with Henry for a month after their marriage. 10 days after she left, she returned with a John A Devorak to pick up her things. His sons knew these details because they lived with their father during the marriage and were witnesses to her desertion.

John A Devorak's deposition reveals that Alice's brother asked him to help get her things. The separation seems to have been amiable, because Henry A Hobbs treated Devorak to dinner and let him stay the night before they took Alice together to Petersburg the next morning. Devorak drove the wagon with her things while Hobbs took Alice in the buggy. When asked whether Alice told him whether she were leaving permanently, Devorak stated, "She said she could not live with Mr. Hobbs there."

At the January term of 1906, the circuit court declared the couple divorced.

The devil is in the details. So what might have made Alice unable to live with Henry? What was so difficult for her out on their farm in Prince George? Their marriage license reveals that she was a 30 year old widow and he was 66 years old. That's quite the age difference, isn't it? Also, who was her first husband? Turns out, he was Matthew Nathaniel Emory, my 4th great uncle - the youngest brother of my William Robert Emory whom I mentioned earlier. Alice was left a single mother when Matthew died; she was listed as a widow with a two year old - Matthew Nathaniel Jr in the 1900 census. Coincidentally, the day Alice left Henry was Matthew Nathaniel Jr's 4th birthday!

A year after their divorce, Alice married Henry Lewis Humphries. By the 1910 census, Alice is enumerated as the mother of three children: Matthew Emory, Bessie Hobbs, and Martha Humphries. Bessie Hobbs was born in September 1902 just nine months after her parents' divorce. So, if Henry A Hobbs is Bessie's biological father, Alice had just barely conceived her during the one month she lived with him. Did Alice know she was pregnant when she left her husband?

Alice's son Matthew Emory went on to get married, and to father two children. His first wife died at the age of 46 after a three year battle with cervical and uterine cancer. A year later, Matthew Emory (my mom's great-grandmother's first cousin) went on to marry a widow, Alma May D'Bene née Chappell (my dad's third cousin)!

Alma May Chappell was born in 1908 in Surry County, Virginia. Her grandmother, Anna Delia Hoye, was born in Manchester (now South Richmond) but moved to Surry after her marriage. Anna's maternal grandparents were Joseph Williams and Ona Ann Adams of Powhatan County. So while it was a wild surprise for me to find a couple that connected my mom's family to my dad's, it's not entirely shocking when you look at the geography.

I discovered that my Granny Linda (my mom's stepmom) is a DNA match to my dad! Turns out they're 5th cousins through their shared Hite ancestor from Halifax County, Virginia. Another surprise was that my Aunt Judy (my mom's sister) was married to my 5th cousin on my dad's Wooldridge & Elam side from Chesterfield County.

Here are a few take away points from these family history surprises!

1. Maintain a thorough family tree that goes out and down as much as it goes up. The only way I was able to confirm any of the connections I've mentioned here is because I already had their families in my tree. I nearly always include the parents of a new spouse that I add to my tree. These webs are impossible to maneuver if your tree is not rooted in solid research and supporting strong branches!

2. Take advantage of the amazing chancery records available in Virginia! Use my suggestions for searching according to surname and county. Be patient and scan the entire document, page by page, until you find that little nugget of information that can be that next necessary catalyst to your research!

3. Expect surprises in your DNA match list. You are going to find surprise matches. You are going to find evidence of infidelity and/or children conceived out of wedlock. Your DNA results may even be the clue that reveals one of your family members had a child out of wedlock. Other surprises may be that someone was adopted and no one ever talked about it. Expect that your mom might have cousins who married your dad's cousins. And if you're from an endogamous community, your parents might even be cousins too. Expect the unexpected.

Family history is filled with surprises. People are unpredictable. Sometimes whole communities stay put and intermarry. Other times, people somehow connect to one another when we least expect it, reminding us just how small the world is, after all.

I went searching for an Emory, and I found a Hobbs who had once been an Emory. That find helped me discover not only an interesting story - one undoubtedly filled with great pain and sorrow - but also whole new branches to my family tree. Oh! And our Alice was born Alice Liney Nunnally.

What surprises have you uncovered in your family history research? Do you expect the unexpected?

This post was inspired by the week 6 prompt "Surprise" of the year-long series that I'm participating in with Amy Johnson Crow's 52 Ancestors in 52 Weeks.

My ancestors - and your ancestors - deserve the best researcher, the most passionate story-teller, and the dignity of being remembered. So let's keep encountering our ancestors through family history and remembering the past made present today!
at March 24, 2019