The Mystery of Kenneth Helvering 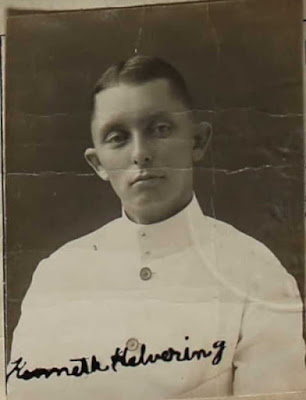 As we plug away in our genealogical research, invariably certain rabbit holes turn into real research questions. At first, these diversions are just mere curiosity - "hmm...this person looks interesting!" But as the rabbit holes reveal real holes in our research, we must stop our digging and decide how to proceed and what questions we want to answer. So let's take a moment to explore the mystery of Kenneth Helvering.

Several years ago, I was working on descendancy research for the children of Joseph Williams and Ona Ann Adams of Powhatan County, Virginia. I found that their son John H Williams had left Powhatan County, as many did in his day, and headed for Manchester City (now South Richmond) on the southern bank of the James River across from Richmond. By the time of his father's death in the mid 1890s, he was living in Newport News in Warwick County. There, he worked as a ship carpenter at the Newport News Shipbuilding and Dry Dock Company.

John H Williams and his wife Mary Frances had one daughter, Ida Virginia Williams. In the 1900 census, I found Ida living with her husband Edwin Helvering, son Kenneth M Helvering, and her mother. Ida is shown to have had two children, but only one is living. Now, Kenneth is listed as being 6 years old, though his parents are shown as being married in 1897. I didn't think much of this though - how often are ages incorrectly listed in census records?!

It wasn't until I saw his photo, and the photo of his mother, that I really wanted to know more about Kenneth. Did he marry? Did he father any children? Unfortunately, the trail seemingly ran dry in 1930. I simply couldn't find anything else about him.

Field trip to the cemetery!

With no more information on Kenneth, I turned to his mother Ida. I found that she passed away in 1930 and was buried in Greenlawn Memorial Park in Newport News. Her husband Edwin remarried to a Marie Schmidt in 1934. Conveniently, Ida's parents John H and Mary Frances Williams are buried at the same cemetery. Guess what that means? Field trip time! 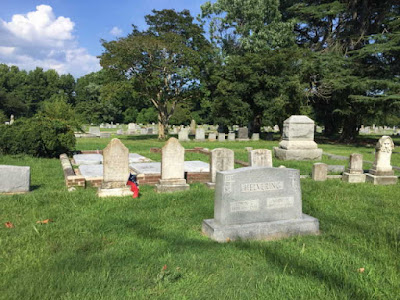 So on 10 July 2016, I took a trip to Greenlawn Memorial Park. After meandering all over the cemetery - which felt like forever and made my eyes go in and out of focus staring at so many names - I finally found the Williamses and the Helverings! Here I found Ida's parents, alongside Ida, and Edwin with his second wife Marie. And then I saw the strangest thing: a little broken tombstone for a Ruth F McGruder propped up in front of Ida. And next to her rests a Charles Kenneth McGruder. 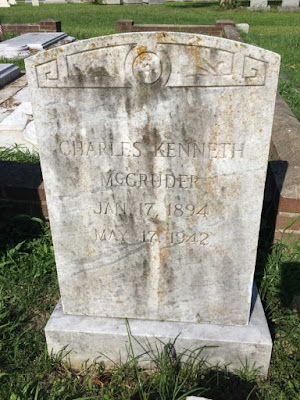 Could this Charles Kenneth McGruder be Kenneth M Helvering? The birth date of 1894 lined up, and there was the name Kenneth. But McGruder is nothing close to Helvering. Could "M" have been an abbreviation for McGruder?

After doing some more research on this Charles Kenneth McGruder, I found that his obituary was published on 18 May 1942 in the Daily Press in Newport News. Additionally, I found that the Daily Press also published obituaries for Edwin Helvering and for Ida Virginia. So on 20 August 2016 I went back to Newport News to the Martha Woodroof Hiden Memorial Room at the Main Street Library. There I was able to find the obituaries and burial announcements I needed!

Now that's odd! Charles Kenneth McGruder is listed as the step-son of Mr. and Mrs. E. G. Helvering! But then I remembered that Edwin had remarried in 1934. So at least Maria was his step-mother. 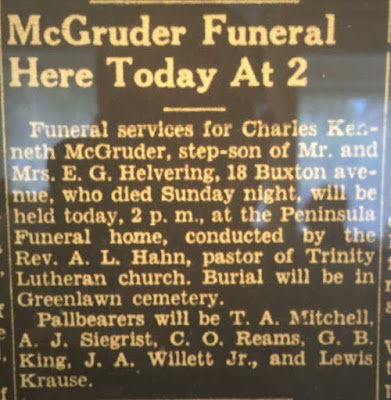 But what was the "long illness" that he died from? And where was he living in 1940?

But where was Charles Kenneth in 1940? I found him in the 1940 census, not in Newport News as I expected, but in Williamsburg as a patient at the Eastern State Hospital for the Insane. Whoa! So he had some sort of debilitating illness that caused his step-parents to put him away sometime after his mother passed away.

I reached out to the Eastern State Hospital to see what records they might have still on Charles Kenneth McGruder. I was hoping to at least get a record on the reason for his entry to the hospital. Since he has been deceased for over 50 years, they were able to grant my request! A week later, I had mail from the hospital! 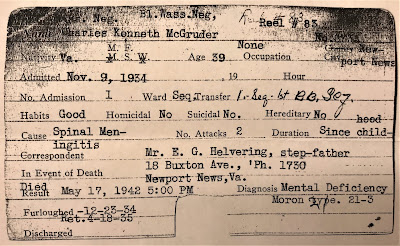 All records for his stay at Eastern State Hospital were destroyed except for this Master Patient Index card. But even with this simple index card, we have the story.

Charles Kenneth McGruder was the step-son of Edwin Griffith Helvering. He contracted spinal meningitis as a child which caused a "mental deficiency." He was first admitted to Eastern State Hospital on 9 November 1934. After a brief furlough from December 1934 until April 1935, he lived the remainder of his life in the hospital. He then passed away on 17 May 1943 at 5:00 pm. From the other side of his Master Patient Index card, I learned that his cause of death was thyroid cancer.

Eastern State Hospital was founded in 1773 in Williamsburg, Virginia as the first public facility devoted solely to the care and treatment of the mentally ill in the current United States. I'll never know the reason his step-father decided to send him there in 1934, but I can't help but assume it had something to do with his new marriage in February of that year.

It's also curious that all public records for Kenneth from 1900 until 1934 refer to him as Kenneth M Helvering. His mother Ida's death notice lists her son simply as "Kenneth" and her address as 18 Buxton Ave., which corresponds to the address given for Edwin G Helvering in the Master Patient Index card as well. So we can safely confirm that Charles Kenneth McGruder was indeed the same person as Kenneth M Helvering. At what point did he start to use his birth name again? Was this an attempt on the part of his step-father to distance himself from his responsibility as a caregiver?

Charles Kenneth McGruder - also known as Kenneth M Helvering - was my grandfather's second cousin. I wonder if they knew of one another, if their parents were close - as first cousins - or if he ever visited Powhatan County. What did Kenneth think of his time in the Philippines? How must it have been for his mother Ida to be the daughter of a Powhatan boy, to be born and raised in Manchester City, and then to travel across the world from Newport News to California to Hawaii to the Philippines? What was it like at Eastern State Hospital for Kenneth in the 1930s and 1940s?

Finding Kenneth gave me opportunities to learn new skills, to discover new record sets, and to explore a new cemetery and a new library. Encountering him in these records helped me paint a fuller picture of his life, and to bring into focus as one man who had before appeared to be two.

What mysteries have you solved at the library? Have you considered supporting your state library?

This post was inspired by the week 5 prompt "At the Library" of the year-long series that I'm participating in with Amy Johnson Crow's 52 Ancestors in 52 Weeks.

My ancestors - and your ancestors - deserve the best researcher, the most passionate story-teller, and the dignity of being remembered. So let's keep encountering our ancestors through family history and remembering the past made present today!
at March 21, 2019