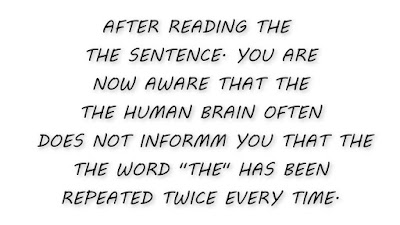 Our brains so often can play tricks on us. We're so busy multi-tasking all the time that we don't always see what's right in front of us. We're on auto-pilot, just like when we're driving a familiar road and seem to just show up at our destination.

Take a look at the image above. How many of you noticed that "the" was repeated twice each time? Did you notice that "inform" was spelled as "informm?" This is just one example of how easy it is for our eyes to see what our brain wants to see.

When it comes to our genealogy work, and looking at the records that will unlock our family history, we need to develop and nurture a critical eye to see what is before us. If we only see what we want to see, we're going to make assumptions that may lead us down the wrong path. And in genealogy, the wrong path may mean the wrong family.

Let's look at four steps you can take to nurture a critical eye in your genealogy research. We'll look at examples from my research on John Stratton of Powhatan County, Virginia. This John is the father of David Stratton - the common ancestor from my 2019 Family Reunion.

We need to know everything we know about a particular person we are researching. How do we know that they are the child of their parents? How do we know they aren't being confused for a first cousin of the same name? By making a timeline, we can see where all of our documents have been found and visibly keep track of what we know - and do NOT know - about our person in question.

A few months ago, I decided to make a timeline for John Stratton of Powhatan County, Virginia. It's a working document - I add to it as I find more sources. I use Microsoft Word and organize each bit of information by year - day - month. I label each event, include bullets of information underneath, and I make a footnote with the proper citation for each event. The great thing about timelines is that they can help us to work through the first three steps of the Genealogical Proof Standard (GPS). We see whether our research is thorough and reasonably exhaustive, we are able to keep complete and accurate source citations, and we can begin to analyze and correlate what we have found.

This has already borne fruit for my research. In finding John over the years, I have also been able to see how he fits into a family unit within the county. I can see all the various documents I have that include him and his family from deed books, order books, land and personal property taxes. I can see who his neighbors were and who he interacted with most in the county. As I look at my timeline, I am naturally developing and nurturing a critical eye because now I can ask myself, "What do I know and what do I not know?"

After we have begun to nurture our critical eye with a timeline, we'll see possible conflicting pieces of evidence. What are we going to do with that bit of evidence? Ignore it?...or will we work to resolve that conflict? It's no accident that the fourth step of the GPS is the resolution of conflicting evidence.

In my research with John Stratton of Powhatan County, I wanted to know where exactly he lived at all times. With changing county borders, this can be a challenge, but it was vital to verify that all of the records I had for John Stratton were actually his records. In my research, I have been focusing on the research question, "Who is my John Stratton's father?"

According to A Book of Strattons, two volumes published by Harriet Russell Stratton in 1908 and 1918, my John Stratton was the son of Thomas Stratton. But there was also a John Stratton, son of William Stratton. Since Thomas and William were brothers living in neighboring counties, how can I be sure that I wasn't confusing these two first cousins?

What I knew for certain - from my timeline - was that my John Stratton lived in what is now Powhatan County until moving to Cumberland County in 1791 where he wrote his will in 1805 and passed away by 1807.

Our third step in nurturing a critical eye in genealogy is to double check our sources. Are we using an original document or is it a transcription? Could the name have been transcribed incorrectly?

What does my source say and what does it come from? First, my information comes from a transcription in a book, the second volume of The Ligon Family and Connections by William D. Ligon. In this book, on page 627, there is the text of a petition written on 16 November 1781 from the "Barracks near Cumberland Co. Ct. House." Among the signers are John Stratton and William Stratton.

Before I went to double check my sources, I had a few hypotheses about this 1781 conundrum. My first was that perhaps these were troops from Powhatan that were travelling to Cumberland where they wrote this petition. That idea was squashed when I re-read the petition that says that the subscribers were "inhabitants of this county." Next idea? Well, it's a transcription, so I figured maybe "Stratton" was misread from "Shelton" or "Skelton" - two surnames I have seen in Cumberland County records. I knew I wouldn't know for sure until I double checked my source.

Thankfully, this book cited their source as, "Calendar of State Papers, Vol. 2, p. 604." I recently took a trip to the Library of Virginia where I found this book and voila, presto, eureka, I found something!

Do you see it? Instead of "Barracks near Cumberland Co. Ct. House," as The Ligon Family and Connections had transcribed the Calendar of State Papers, this reads, "Barracks near Cumberland O. Ct. House." Well - you might assume - this is a transcription too...so maybe William D. Ligon was correcting an error? So in double checking my source - Calendar of State Papers - I decided to check the pages before page 604 in case another document was also from the same location.

The previous document begins on page 602. Here's its heading:

This letter was written on the same day, 16 November 1781, and it's noted as being from "Cumberland Old C. H." So what's the big deal? Cumberland Old Court House must be in Cumberland County, right?

4. Analysis: What does it all mean?

We've worked with a timeline, we have found conflicting evidence, and we've double checked our sources. But what does it all mean? We need to analyze what we've found.

As I look back at the source in the Calendar of State Papers, I see that the first signature is "L. Mosby" and there is also a "Litty. Mosby Jnr." that signed. And now that the scales had fallen from my uncritical eyes, I could then see several other familiar things. Nearly all of the names I recognized as neighbors of John Stratton - not in Cumberland - in Powhatan County! How did I know they were his neighbors? Because I included all neighbors' names that were mentioned in land deeds, processionings, and those mentioned as witnessing events with John Stratton. And where did I write these details? In my timeline!

We all need to nurture a critical eye when it comes to genealogical research. Otherwise, we're going to be reading one thing and recording another. We'll be assuming we know what we're looking at when we're really just confusing ourselves and our future readers. We might even be researching the wrong tree.

We can nurture a critical eye in our research by beginning a timeline - do it today, y'all! - and by working to resolve conflicts we see in our timeline. We need to double check our sources and then spend time in analysis to be clear of what we have found. And next thing you know, you'll be doing better research and working much closer to following the Genealogical Proof Standard in the process!

When I made this discovery recently that John Stratton was NOT a resident of Cumberland in 1781 - but had instead signed a petition in Powhatan County at the Old courthouse - I did a little dance right there in the Library of Virginia! And, as I feel I must do, I shared my joy with the librarian. We all need to share our success stories!

How are you nurturing a critical eye in your genealogical research? Are you using a timeline? What types of sources are you relying on that might be leading you astray?

This post was inspired by the week 19 prompt "Nurture" of the year-long series that I'm participating in with Amy Johnson Crow's 52 Ancestors in 52 Weeks.

My ancestors - and your ancestors - deserve the best researcher, the most passionate story-teller, and the dignity of being remembered. So let's keep encountering our ancestors through family history and remembering the past made present today!
at October 07, 2019