A Wintry Trip to Monticello 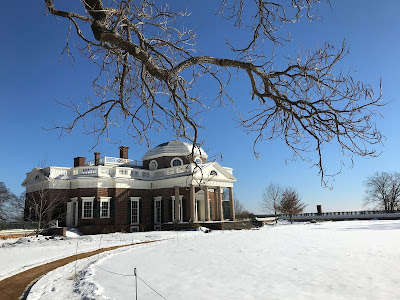 I can thankfully report that I've gotten my "Virginian Card" back. I grew up in Virginia, and nearly all of my ancestors lived in Virginia back into the 1600's. I'm nearly as Virginian as Virginian gets, you see. But somehow - how, I don't know - I had never been to Monticello until this week. I've traveled all over the world, but when it comes to being a local tourist, I'm just not quite so good.

But as life has it, some of my best friends (Thomas and Elizabeth) are moving to Guatemala to be Orthodox missionaries with OCMC for at least two years. [More specifically, I'm their koumbaro - it's like a Godfather for an Orthodox married couple. Anyhoo, I'm gonna miss them tons!] So since they're heading out next month, we're trying to get in as much quality time as we can. What better way for history nerds to hang out than to see more of the history that Virginia has to offer? Naturally, Monticello was high on our to do list.

Even though I went to James Madison University - not the University of Virginia - I've always loved Thomas Jefferson. He's a complex figure in the history of our nation. But he's also the man whose foresight and skill with the written word gave me the freedom to worship (or not) the God of my understanding without government interference. So I was excited to visit the home of my beloved TJ!

And then it snowed. A lot! In the Richmond area, there was over a foot of snow! For Virginians, that can be debilitating. So I was worried our trip would get canceled. Thankfully Monticello was only closed for a day, so our trip for Tuesday was on as scheduled. 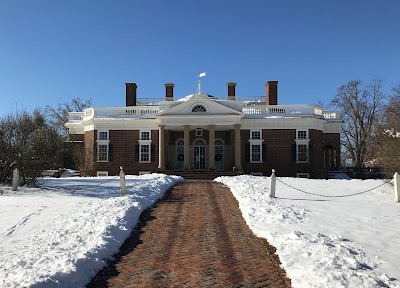 This was our first sight of the famous Monticello - the home of Thomas Jefferson. It was a tad disappointing at first - until we realized this wasn't the nickel image of Monticello we all know and love. Turns out, this is the front of the building, and the back side is the more famous image. I have no photos of the inside because photography isn't allowed there. But, that doesn't mean I can't reflect on some of the tour.

First, let me say that the house presents a good image of the man Thomas Jefferson. He was a man interested in learning, in business, and in having the greatest technology of his age. His home was like a natural history exhibit meets science lab meets library. It feels like it would have been the sort of home you'd want to visit for a casual visit with the cool professor you made sure to Facebook after the class had ended. There were fossils, Native American tools, walls of books, and scientific instruments. He had European conveniences like an indoor bathroom, sky lighting, beds tucked into the walls and a way to open the door without getting out of bed. The dining room was meant to be casual and the tea room made you want to sit and enjoy a good conversation.

With all that said, there is also the other side of Thomas Jefferson: the man followed by controversy. That controversy followed us inside, as a guest on our tour repeatedly challenged the facts presented by our tour guide. This guest insisted that Thomas Jefferson did not father the children of Sally Hemings and that he was a faithful traditional Christian. You'd think from his indignation that there were some grand scheme to undermine the sanctity of a national saint. I reminded the man - as calmly and lovingly as I could muster - that I was there to listen to the tour of our paid guide (not of him) and thankfully he kept quite after that. It's frustrating to me that there are so many who view updates on the study of history as revisionist history. History doesn't change; our perspective though on that history can.

After our tour of the home, we took the Slavery at Monticello tour. And it was awesome! Our guide was passionate about the topic and you could tell he really gets out of bed each day to educate and to inspire that passion in others. We saw the reproduction of the Hemmings Cabin,the textile workshop, and passed through Mulberry Row where the enslaved lived and worked. We heard details of the evidence behind the relationship of Thomas Jefferson and Sally Hemings - which I must say was fascinating if you're a genealogist! If only my ancestors had kept such detailed records of those whom they enslaved...BUT it does inspire me to dig deeper to see what records my ancestors did keep.

After our tours, we were able to walk around the grounds and take some more photos. It really is a beautiful site with great views of the area around Charlottesville. Thomas Jefferson had a good eye, that's for sure! Since it was just a couple of days after a snowstorm, the grounds were mostly empty of visitors. The snow had hardly been disturbed but for the occasional footprints or tracks from a passing deer.

Reflections on a man

What struck me most about my trip to Monticello is just how American the man - Thomas Jefferson - really was. What do I mean by that? Thomas Jefferson was a Virginian. He was educated. He was a renaissance man, a leader, a businessman. Yet he was also fascinated with Europe, with having bigger and better things. He was a thinker, an idealist, a writer, a reader. And yet, he was also a man who struggled with - or perhaps found comfortable - the paradox of being a man who held ideals about human liberty who also owned hundreds of other human beings. A man who wrote the Virginia Statute for Establishing Religious Freedom adopted by the General Assembly in 1786 yet had power over the religious freedom of those in his control.


I did not leave Monticello thinking less of Thomas Jefferson. I did however leave Monticello with a clearer vision of the arch of American history, one whose evolution has yet to be concluded. One which is forever in a state of flux and is always getting more refined as we age as a nation. The trip for me was not so different from researching my ancestors who lived prior to the American Civil War. I was faced with the necessity of normalizing slavery in order to encounter a man who enslaved others.

I was faced with the reality of something inherently brutal and inhumane and yet I had to become numb to that reality. I had to face what it must have been like to be a man who could see a woman as inhuman enough to be my property and yet human enough to be the mother of my children. I had to face in a deeper way the life of my own ancestors - namely David Stratton of Powhatan County, Virginia - who owned their own children and grandchildren. Like Beth Wylie - a cousin of mine and blogger over at Life in the Past Lane - feel even more strongly that I have a duty to preserve and document the enslaved people of my ancestors.

A fitting end to my trip

There's nothing like a tour through Old Virginia to work up a healthy appetite! So you'd think I'd have gone over to an old tavern or found a Southern restaurant for some sweet tea, grits, or sausage gravy biscuits right? Well, these three Orthodox kids are trying our best to keep the Nativity Fast so we sought out some vegetarian fare. That took us to a delicious Indian buffet in the heart of Charlottesville. We got there just in time to eat our fill before driving back to Virginia Beach. But as we got back to my car - after walking some of the meal off - we noticed something peculiar.

Both sides of the street where my car was parked had chalk writings and drawings. We were trying to figure out what it was all about. Then we noticed the name Heather in a few places. A picture of a girl. A Bible left on the sidewalk. The word hub - love - in Arabic.

And then it hit us - we were parked at the exact location that Heather Heyer was killed on 12 Aug 2017.

It was a sobering end to our trip to Charlottesville. We had spent the day reflecting on the paradox of American idealism. We had spent the day walking through the home of Thomas Jefferson, discovering the lives of those whom he had enslaved. And then we had parked - of all places in the city - at the exact location where a white supremacist had killed a woman peacefully protesting racism. In 2017. A chilling end to our wintry trip to Charlottesville.

I have a deep love for my country. I believe in ideals. I love that we are a nation that fights for ideals we haven't yet seen nor even fully experienced. I love that we are a country that looks at itself in the mirror and is able to pinpoint the parts we want to improve upon while also holding pride for all that is good and true and beautiful.

This is how I feel the day after my trip to Monticello. I'm grateful to our Founding Fathers who designed a country that would be forever improving, forever becoming an ever greater America - never resting upon the laurels of our forefathers nor the illusion of an idealized past. I'm grateful to Thomas Jefferson - the man, not the saint - who like me had within himself ideals and dreams, passions and sins.

It's this man whom I encountered this wintry trip to Monticello.

Have you been to Monticello? How did your visit impact your genealogical research or your study of the enslaved people of your family? How did Monticello shed light on American history for you?

Until we meet again, keep digging and encountering your ancestors through family history research and remembering the past made present!
at December 12, 2018