Last time, I wrote about researching the clergy listed in our ancestors' marriage records. Since then, I had the opportunity to research at the Virginia Baptist Historical Society (VBHS) on the campus of the University of Richmond in Richmond, Virginia. In this post, I'll share how I made new discoveries about Joseph Williams and Ona Ann Adams, my brick wall ancestors, through research in church records.

1. What church(es) did my ancestors attend?

After finding the names of clergy in marriage records and doing preliminary research on those clergymen, I was able to make a list of potential churches Joseph and Ona Ann may have attended. As all but one were baptist churches, I decided to focus first on those baptist communities in the area this couple lived. Since they lived in Powhatan, but on the border with Chesterfield County, I focused on the southeastern corner of Powhatan County and the southwest corner of Chesterfield County.

The first step of doing research at the Virginia Baptist Historical Society is to call ahead and set up an appointment to view the records. The VBHS is an amazing resource for anyone researching Baptist churches in Virginia. The communities I'm interested in are part of the Middle District Baptist Association. This is important to know because the various churches belonging to this association met regularly over the years. Each of these district meetings has minutes that can be viewed and studied, in addition to the minute books for many of those local communities.

I started with Skinquarter Baptist Church. The VBHS has minute books for 1824-1844, 1868-1879, and 1880-1896. I scanned the pages for familiar surnames - particularly those of my ancestors and pastors who I had previously noted. Though I came away with notes on pastors and various members, I didn't find the names of any of my ancestors. I did, however, learn that Skinquarter Baptist Church left the Middle District Baptist Association during the years 1836-1848. Several times, I noticed there being some sort of conflict with the neighboring community of Mt. Hermon Baptist Church.

Feeling slightly discouraged, I moved on to Old Powhatan Baptist Church. The VBHS holds the 1845-1900 minute book for this community. Here, I saw many more familiar names. I saw relatives listed from other parts of my family, and finally I found Joseph and Ona Ann!

I was absolutely thrilled to have clear evidence of membership at two communities in the area: Mt. Hermon Baptist Church and Old Powhatan Baptist Church. And more than that, I now have the dates of the baptisms of both Joseph Williams and Ona Ann Adams! But I wanted to know more. What brought them there? What could I learn about them based on their chosen communities? 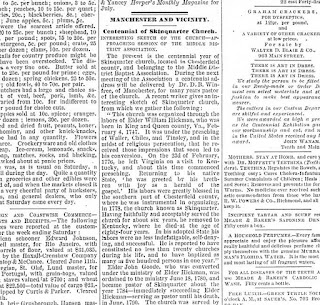 I found an article in The Daily Dispatch describing the history of Skinquarter Baptist as well as the disagreement the community had with the founders of Mt. Hermon. A similar story is told in the biographic sketch of Rev. Samuel Dorset found in Virginia Baptist Ministers, Third Series published in 1912. Here, I learned that my ancestors chose in Rev. Samuel Dorset a pastor "described as 'well informed, sound in doctrine, and liberal in his views'" and a church community that "committed themselves to missions, Sunday schools, temperance work, and an educated ministry."

4. How far did my ancestors travel for church?

All three churches are roughly equidistant from the family cemetery. By using modern roads, it is a 4 mile trip from the cemetery to Mt. Hermon, and a 6 mile trip to both Skinquarter and Old Powhatan. In the 19th century, travel would have been on much rougher roads and by horse and carriage. That my ancestors made church attendance a priority - as well as participation in church meetings recorded in minute books - despite the distance speaks to their determination and commitment.

*****
I have been researching Joseph Williams and his wife Ona Ann Adams for years, but much of their story has remained a mystery to me. By noting ministers in marriage records, and following through in researching those ministers and their church communities, I was able to find my ancestors in church records. I have specific dates for when my ancestors were baptized and joined two local communities. I even know now how the Dorset area of Powhatan County got its name - from my ancestor's beloved pastor from New Jersey! I grew up driving past Dorset and Mt. Hermon, and I went to high school next door to Old Powhatan Baptist Church - all the while never knowing my family's connection to these places. Little by little, this little hometown of mine is proving to be home indeed!

Join me next time as we continue to encounter ancestors through family history and remember the past made present!
at July 10, 2018