Finding Home In My Hometown

When I graduated from Powhatan High School in 2005, I didn't expect I'd ever look back. I grew up in a county in Virginia with only one high school, where the times seemed to change as slow as molasses on a cold day, and where stoplights were feared nearly as much as signs of the End Times. I was like a racehorse at the starting gate, anxious to be freed. I wanted to see the world, to experience something different than country life.

As I saw the world and experienced cultures so unlike my own (and yet also so similar), I discovered that that small unknown place in Virginia had shaped me and molded me like I had never before realized. When someone would ask me in Egypt, for example, "Where are you from?" I'd respond "Virginia," before "America" ever came to mind. I realized then that my home state - and my hometown - were part of my identity even more than being an American.

That small place on the map started to feel more like home the further I moved away. 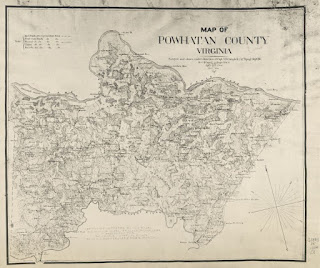 So what is it about a place that keeps calling back to us even as we try to pull away? What calls me back to Powhatan even as I dream of returning to the big city? What changed that made me appreciate my hometown?

I studied my family history.

So just how Powhatan am I? Besides growing up there myself, my grandfather's family is rooted in Powhatan. Arthur Marvin Williams was born in 1914, graduated from Powhatan Agricultural High School in 1931, and was the first man from Powhatan to sign up for the draft for World War II. All of his great-grandparents lived in Powhatan going back to the early 1800s. My furthest known Williams ancestor was a man from Powhatan County named Joseph H Williams born about 1817. You'll learn more about him in a blog sometime soon, for sure. With all of these roots in my hometown, I've decided to just assume I'm related to the whole county at this point!

Powhatan County is a place of woods and fields, red clay and curvy country roads, huntin' and fishin,' "yes ma'ams" and "no sirs", of big Sunday dinners and family reunions. Powhatan is the hometown that found a place in my heart as home.

When I first moved to Powhatan from neighboring suburban Chesterfield as a 10 year old, I never imagined that quiet country place would become home. But I guess it took some growing up and some moving away to bring me to take a second look. And looking closer I found family, and in encountering my ancestors in Powhatan, I found myself a home in my hometown.

How were you shaped by your hometown? Are you from the same place as your ancestors?

I'll see y'all next time on my journey of encountering ancestors by remembering the past made present.